Posted on February 5, 2016 by louisgrumet 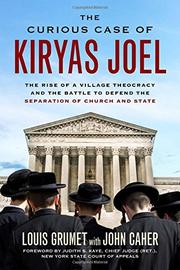 THE CURIOUS CASE OF KIRYAS JOEL

Post-mortem of an unusual Supreme Court case regarding the separation of church and state.

In the 1970s, the reclusive, ultra-Orthodox Satmar Jewish community of Brooklyn began to expand into a new enclave in upstate New York. Named Kiryas Joel, the new community would bring unexpected challenges to existing communities as well as to the existing school district. With the assistance of former New York Law Journal senior reporter Caher, Grumet, former executive director of the New York State School Boards Association, chronicles a court case spurred by unique issues the village presented regarding the education of special needs children. In a book that is far more an insider’s view of New York state politics than an examination of the Satmar movement, the author introduces readers to an up-and-coming state assemblyman named George Pataki, a cynical side of Gov. Mario Cuomo, the many unseen bosses of New York’s Democratic machine, and the inner workings of the state court system. After the state legislature passed a bill creating a new school district catering entirely to the village, Grumet sued to prevent the new district from creating a precedent that might jeopardize the First Amendment. After moving through multiple levels of the state courts, Kiryas Joel appealed to the Supreme Court, which voted against the new district. Undeterred, the state went on to pass more laws, fighting even more court battles, to keep the school district alive. The story of this epic court battle will fascinate those interested in the legal system as well as those intrigued by Albany politics. However, the author presents only one side of the story. Readers will wonder about the nature of the counterarguments of the Satmar community.

Though a balanced, objective study of the case would be useful and illuminating, Grumet does provide a readable look at the nitty-gritty of New York’s political machine.